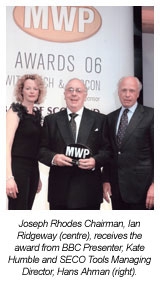 Group Rhodes was awarded first prize at the Metalworking Production Awards 2006 in the category of Best Manufacturing System.

Working in partnership with a customer, Joseph Rhodes developed and built a new manufacturing system for producing quick-fastening captive screws used predominantly within the automotive sector.

Traditionally these fasteners were produced from two separately pressed pieces, machined and then welded together. This involved a four-stage manufacturing process, which was becoming increasingly expensive and impractical. Also, changing customer trends and intensifying competition over recent years resulted in the need to supply these fasteners with shorter lead times and at lower prices.

Rhodes' solution was the automated stud manufacturing system, which allows single-piece production. In developing the new system, problems such as component loading, tooling, pressing operation and control were overcome. And, by reducing the production process from four operations down to one, the customer has achieved cost savings and reduced lead times, while increasing production, and sales revenue.

The new system, with automated feed, can reach speeds of up to 150 components per minute, an increase of 50% over previous methods used. And, that's in addition to raw material reductions and the removal of a welding process.

Other savings have been achieved in machine utilisation and maintenance. Where previously the components were hand fed into three separate mechanical presses, the new production process use one dedicated manufacturing system and one overseeing operator who now runs a cell of three machines.

At the heart of the system is a Rhodes horizontal, 80tonne, double-sided, direct-driven mechanical press. The structure is robust to minimise deflection and ensure the stresses set up during operation are adequately contained within the machine structure.

The press operates in conjunction with material handling equipment, which loads, via a vibratory liner feed system, the fastener into a bespoke indexing unit. This automatically transfers the blank into the tooling area for forming. The press tooling area has been machined with tool guidance slots and stops to enable accurate positioning of tools and to reduce set-up time. An airflow management system ejects finished products into a container ready for packing and delivery to the customer.