The Wakefield based engineering firm received the award from The Wakefield Civic Society to signify the 190th anniversary since the firm's founding in 1824.

"I was delighted to accept the honour and thought it fitting to have the plaque unveiled by the Mayor of Wakefield, particularly as the company's founder, Joseph Rhodes, and indeed his son William Rhodes were both Mayors of Wakefield in 1865 and 1903 respectively.

The Blue Plaque award offers local recognition which we often miss. I am reminded of the biblical phrase; A prophet is without honour only in his hometown, and in his own home - which is appropriate to ourselves as we are generally better known in the foreign markets where we sell our machinery, as opposed to the city where the Company has been established for 190 years."

Whilst many manufacturing companies have interesting and longstanding historic heritages, the Rhodes story takes things to a different level. Joseph Rhodes himself started the founding company of the Group, Joseph Rhodes, in 1824 building his first machine in a small workshop in Wakefield. In 1921 the company moved to its current eight acre site at Belle Vue in Wakefield and in 1910 it opened an office in Paris which signified the company's first move into the export market. Exports remain a vital element of the business today with around 40% of the products manufactured by the Group exported to 30 different countries each year.

The Company has undergone significant changes over the years, none more so than since the Management Buy-Out in 1984, which was undertaken by the current Chairman, Ian Ridgway.

Engineering and manufacturing expertise is definitely not in short supply within Group Rhodes; it manufactures and markets over fifty basic ranges of machines, but the real jewel in the crown is its ability to design, develop and manufacture bespoke machinery and complete turnkey solutions. Efficient product integration and Lean manufacturing techniques are second nature, but this is underpinned by a longstanding engineering pedigree and traditional family values. At the end of the day, this is still a family-run company. Despite the fact that Ian Ridgway has turned 80 years old, he still plays an active role as Chairman, ably supporting his son Mark Ridgway OBE DL, (Managing Director) and a 6 person Board. 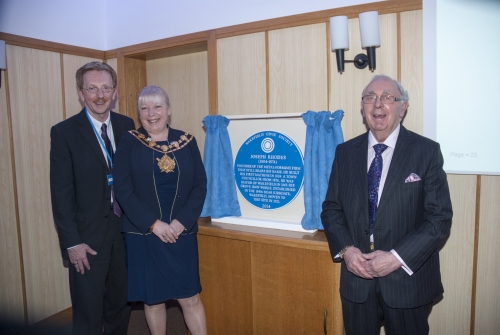